The 2001 USS James Monroe Association reunion took place in October, 2001 in Honolulu, HI and was organized by Miles Anderson, who stayed in Honolulu after getting off the Monroe. This location was chosen at the previous reunion since the Monroe was homeported in Pearl Harbor for a number of years and many crew members had an interest in getting back to Hawaii for a visit. Attendance was less than expected since the event was scheduled so soon after the 9/11 tragedy but a number of hardy members didn’t let this deter them from getting back to Honolulu and meeting up with old friends.

About 20 shipmates attended the reunion and enjoyed the Aloha spirit of Hawaii The arrival on Wednesday get together was held at the Honolulu Yacht Club where everyone enjoyed a pleasant evening with drinks and merriment while sitting on the lanai enjoying the view of Honolulu and a tropical breeze from the Pacific Ocean. On Thursday evening the group gathered at Duke’s in the Outrigger Hotel on Waikiki Beach. We enjoyed the sunset while indulging in drinks and our evening meal. After dinner, the majority of the group attended the Society of Seven’s ( SOS ) show, something that a number of crew member had also done while based at Pearl Harbor in the 70’s. While the crew members have gotten older, the members of SOS have gotten younger since the original members of the group had been replaced by new, younger personnel. Friday was a day for everyone to explore the island at his own pace. It was rumored that a few went surfing but I didn’t see anyone I knew. Did anyone see JC Powell and his surf board? A number of people went to events like luau’s in the evening. On Saturday evening, people gathered at the Hale Koa’s, the Armed Forces Recreation Center on Waikiki Beach, Warrior Lounge for an evening of dining and dancing. A good time was had by all.

Many thanks to Miles Anderson for arranging the reunion and making sure everyone who attended was made welcome. A trip to Hawaii is always enjoyable, but it was made even better by being in the company of old friends. These reunions are a way of getting together with old friends, makeing new friends, and getting the comradery we once shared alive.

A business meeting was held on 10 October 1991 at the Honolulu Yacht Club. All officers of the association were re-elected: John Martin ( President ), John Donaldson ( Vice President ), Richard Reuss ( Treasurer ), and Wayne Sieckowski ( Secretary ). The main topic of discussion was getting a website up and running. The newsletter will be published on the website with contact information only available to members in good standing ( members whose dues are current ). Nick Schneider was volunteered by his wife Jean to be the Webmaster. Thank You, Jean.

Hardcopy newsletters will be sent to Association members in good standing who do not have internet access.

A discussion about getting more people involved in the association was held. The majority of people in attendance felt having and maintaining an up to date website would be a good start. 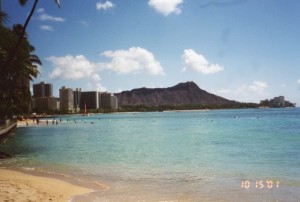 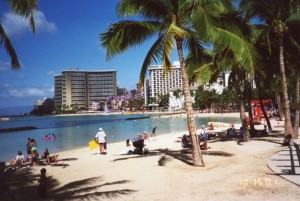 Waikiki Beach With The Sheraton, Royal Hawaiian, and Moana Hotels 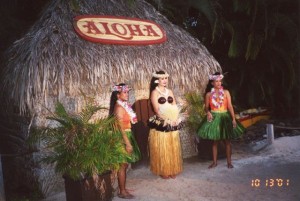 Some Attendees Experienced The Spirit Of Aloha At The Luau