Some of you may be interested in this National Geographic programs that covers the operations of one of the SSGN’s, former Trident SSBN’s that was converted to SSGN’s ( G means guided missile ) to become the US Navy’s latest weapon in the global fight against terrorism. The program will be shown on June 24, 2010.

Century Stealth Sub
Countless movies and novels have fictionalized the secret brotherhood of the submariner. But few of us outside this close-knit community ever get to witness what really goes on deep beneath the ocean waves. Take an unprecedented journey with the US Navy’s latest weapon in the global fight against terrorism: the SSGN or ‘guided missile submarine.’ National Geographic Channel joins Captain Randy Crites and the crew of the USS Florida as they engage in a covert Joint Operations mission with Special Forces: sneaking Navy SEALs on to shore to identify a terrorist target, and taking it out with guided missiles – fired from the submarine itself.

Get an in-depth look at the technology that allows this sub to go deeper, remain submerged longer, and stay quieter than previous generations of submarines. And witness the secret weapons that lay hidden within her hull, allowing her to enable Special Forces deployments anywhere, anytime. This is a new weapon for a new war.

This is a notice for an upcoming event in the Washington, DC that may be interest to some. If you wish to attend please contact John Martin, Larry Hook or the Association for more details. 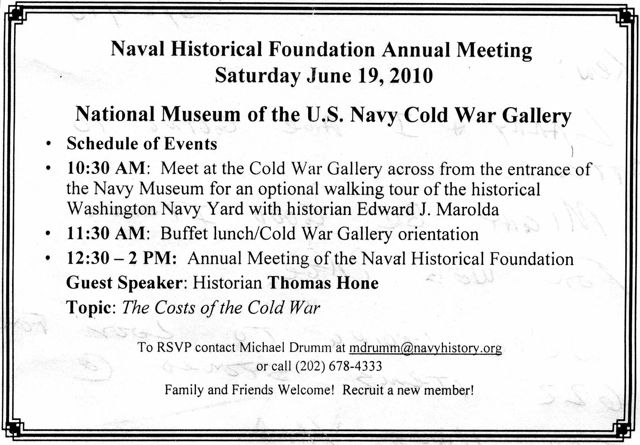 The dates and hotel details for the 2011 USS James Monroe Association have been posted on the website. Look under the menu item for Reunion and Events and then select the menu for Reunion 2011. The next reunion has been scheduled for June 20 – 24 in Charleston, SC.

Welcome to the new USS James Monroe Association website. This is your new, updated source of information about the USS James Monroe, USS James Monroe Association and the activities and events planned by the JMA ( USS James Monroe Association).  There are still two older websites in existence,www.ussjamesmonroe.org andwww.ssbn622.org, but neither of these sites is being updated and may not be fully operational.  The original website, www.jimmyfish.org is no longer online.
This website is now fully operational and should have all of the information that was on the previous two websites except the Guest Book, but we are still in the process of adding new data and information.  The Guest Book entries from 2003 – 2007 are in the process of being migrated to this site.  Entries prior to April, 2003 are no longer available.  If anyone has news, pictures, comments or other information to contribute please let us know via the Contact Us page or email us atssbn622assn@yahoo.com.
For those who are interested, there is also a Yahoo group for the USS James Monroe namedjimmyfish@yahoogroups.com.  Here is the link for the USS James Monroe Facebook page if you are a social network fan.
Now that the new website is up, we are in the process or putting together the first newsletter for 2010 so let us know if you have anything we should consider for the next edition.  We will also soon be starting to plan for the 2011 JMA reunion in Charleston, SC.  Come back to the website in the second half of 2010 when additional details should be available.